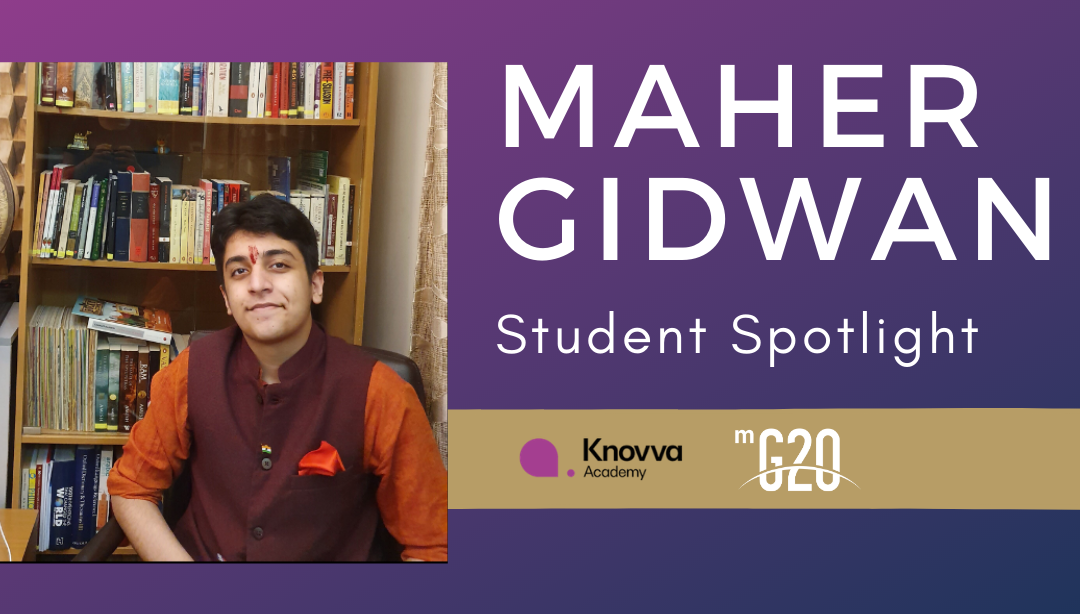 One in Model G20’s Most Valuable Delegation, the United Kingdom, Maher Gidwani is already looking to riff off Knovva’s educational offerings in his own way. In a conversation we had after the UAE native was deservedly awarded for his delegation’s work in this year’s Virtual Summit, Maher speculates that to change the world for the better, he would create a system, “much like Knovva Academy, to facilitate an understanding of the world as a whole; to provide everyone with an understanding of all communities to end pluralism and prejudice.”

Like his company in the Summit, Maher behaves and speaks with wisdom far beyond his years. A longtime fan of Lal Krishna Advani, the Indian politician, and autobiographer who penned the high school student’s favorite book, My Country My Life, written during Advani’s presidency in 2008, Maher has an interesting academic roundness about him: Aside from Eastern world leaders, Maher is equally enamored of Malcolm X, responsible for his favorite quote: “You can’t separate peace from freedom because no one can be at peace unless he has his freedom.”

I suspect freedom has been a lifetime preoccupation of Maher’s; that first reading Malcolm's words left him with a feeling of longtime resonation, rather than new inspiration. “The wisest thing anyone ever told me,” he reflected, “was ‘to choose to live life as if each moment may be your last.’

“[That] helped me to deal with my own grievances and feelings of pressure. Just remind me not to take myself too seriously by looking at myself through a ‘macroscope’ of sorts.”

For as much as that intention might be impressed in Maher, perhaps the execution is less so. Maher tells me that, aside from eventually studying “some combination” of politics, economics, and international relations (“I’m keen on LSE, but my parents favor Warwick”), he would like to have a book of his own poetry published. “And be interning with a liberal party whose values I agree with while attending university, likely in the UK.” If Maher doesn’t have a “macroscopic” view of life and use that to a great advantage, who does?

His favorite food is Sai Bhaji (“a staple of Sindhi Cuisine”); his favorite color, green (a reflection of his Harry Potter house, Slytherin); and his favorite subject in school? “English Literature and Maths are” — improbably — “tied.”

Maher Gidwani will be remembered fondly by his peers in the Virtual Summit. Here’s how he’ll remember us: