Since Friday 28/10 I started getting critical errors popping up all the time.

This happened after Windows updates and apparently a BitDefender update.

I tried almost everything to resolve, but it is still not working...

a) I tried the repair process recommended by BitDefender: When the system reboots, Bitdefender works, it downloads an update and asks for reboot. I restart: the critical errors come back

b ) I tried uninstalling, reboot, reinstall: same thing (Bitdefender works, it downloads an update and asks for reboot. I restart: the critical errors come back)

In the meantime, I have no clue if I am protected or not

I sent a message to support who told me to try and repair (although I already tried before), sent them the log files generated by the support tool, and since then, no news... Ticket number 2016103109200003

Is anyone else facing the same issue? 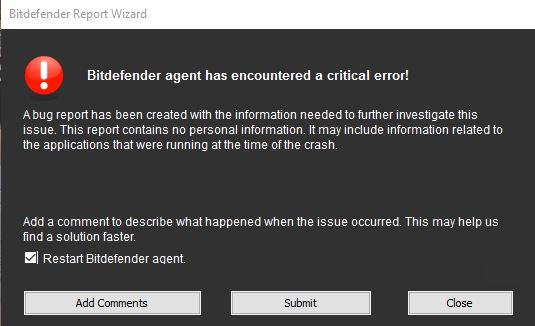