I am seeing an excessive memory utilization that is exhausting all memory on my PC. The PC starts freezing and going unresponsive requiring a hard reset. Upon reviewing the system logs, memory is being exhausted and Windows is reporting out of memory and resource exhausted msgs all on the VSSERV.EXE process (Bitdefender Antivirus Shield). 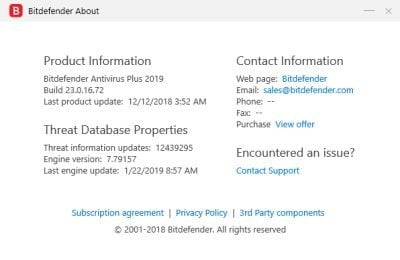 I work with large video files, editing and moving them around my local network. I just had my PC lockup due to memory exhaustion this morning, had similar experiences over the last 2 days but only now have isolated it as Bitdefender doing it. I thought that maybe it was something with video editing toolset I was using that I upgraded a week or two ago... but that doesn't appear to be the case as I just tried copying some files from the network and Bitdefender used 10.4 GB of memory while that completed. It took 30 minutes for the Bitdefender process in Task Manager process list to show it dropping down to ~100 MB in use... but overall system memory did not come back.

As another test, I went into Bitdefender Shield and added an exclusion for a local folder on my primary PC. Went into Windows Explorer, highlighted (4) of the 4 GB .mkv video files (total of ~16 GB) on the network share (secondary Win10 PC) and did a drag'n'drop  copy of them to my primary PC local drive (that I just created the exclusion on). As the copy was taking place, Bitdefender memory utilization started climbing to about 1.8 GB in use (as the first of the four files was finishing copying), to ~3 GB in use (as the second file was finishing copying) and after all four had finished copying... Bitdefender in use had reached 8.8 GB. Not only that, but on the performance tab... total Windows system memory in use had hit 19.9 GB with only 4 GB free, so this 8.8 plus the previous 10.4 GB in still holding and not being released. So there is definitely some kind of memory/resource leak in that the process seems to eventually show the memory no longer in use but it doesn't appear to be being made available again in the Windows total memory pool.

It has now been 30 minutes since the copy operation completed and Bitdefender process is still holding at 8.8 GB in use and Window available memory is still at 4 GB free (and note while the process use is 8.8 GB, less than the 10.4 GB in the previous pic... the total system memory use is 83% now up from the previous 59%... so there is a leak):

A simple file copy operation in the OS results in the same behavior... so that kinda shoots down the thought that it was related to my video editing tools.

So now it has been exactly 35 minutes since the copy operation ended and the Bitdefender process memory use is showing as dropped to a more reasonable level at ~700 MB in use, but the total system memory hasn't come back anywhere near as much (still showing 78% of all memory). Also, memory process utilization in Resource Monitor shows VSSERV.EXE as completely off the charts with a ~20 GB memory commit still:

So what the heck is going on?!? Granted I am working with large files, but Bitdefender is utilizing a lot of memory and not releasing in any within any reasonable amount of time (if at all)… and still even after setting an exclusion on my local folder that I copied the files to.

...and I must stress, this is very recent... I do this activity with large video files like this for the past 2 years (daily) and this memory exhaustion has only started happening very recently. This is also a BIG problem for me as I can't do the work now without a workaround (like excluding the folder) other than completely disabling Bitdefender. 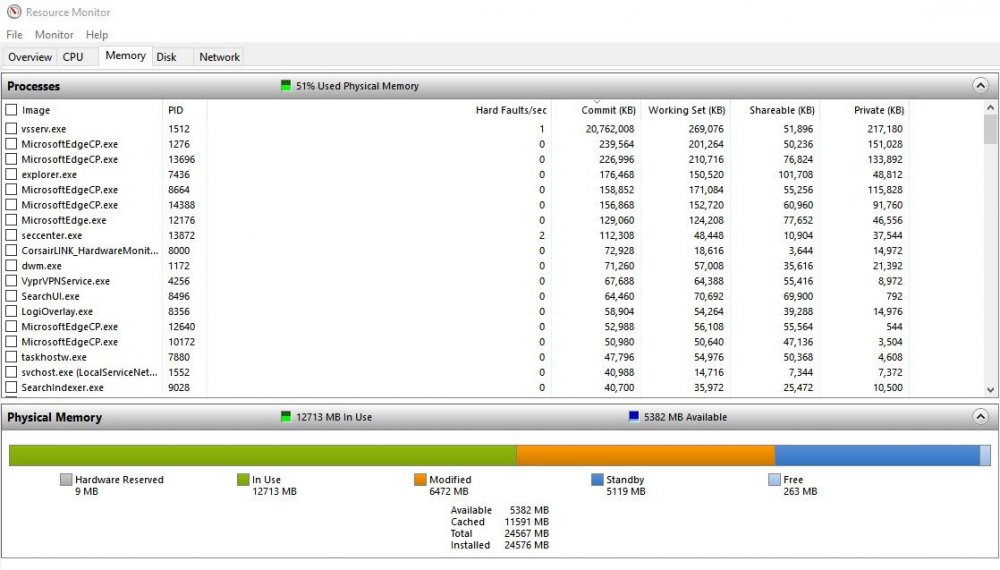