DSperber Defender of the month ✭✭✭
December 2019 in Protection

Something recently changed in BitDefender Total Security 2020 has obviously caused this abend.

Anyway, the situation is this.  I run the new version install of Free Commander XE from its installer file EXE, navigating to that installer file while running the currently installed version of Free Commander XE (which is a program functionally similar to Win7 Windows Explorer or Win10 File Explorer).  Normally I leave the FCXE program still open as I progress through the install ****** screens.  About four screens in on the install ******, I am advised that "FCXE is currently open. Do you want me to automatically close it and then proceed with the install?" to which I always then reply OK, and the install continues to proceed and then complete normally (after first closing the currently active instance of FCXE as promised).

With this new abend in BitDefender, I never am presented with that prompt advising "FCXE is currently open".  So clearly it's this event which is is directly related to the abend.

I am guessing that at this instant BitDefender is trying to formulate the details to present me with about an application attempting an update of a protected folder (or something like that), which normally throws up a screen offering to allow me to activation  a newly created application program exception. Typically what happens here is that the application being installed has detected the intercept and thrown up its own "retry/abort/cancel" screen, which after OK'ing to the newly created BitDefender exception I then reply "retry" on with the installer. And things then go normally, and never show up again (i.e. the next time I do an install of the same program with a newly released version).

In this case I don't ever recall going through that when installing Free Commander XE.  I mean I never previously had to create some kind of application exception in order to move through the install. The FCXE installer simply always detected that it was open and immediately produced its own "FCXE is open, do you..." prompt screen without any interruption by BitDefender. I am guessing something recently changed in BitDefender is trying to "protect" me in the usual way from an application program making unauthorized changes (perhaps to what is now considered a "protected folder"), but is somehow actually incompatible with how the FCXE installer is trying to do its own detection of the program currently being open.

Whatever the cause, the abend is in a BitDefender file, and is only occurring ALL THE TIME when I attempt to run ANY VERSION OF THE FREE COMMANDER XE INSTALLER and let the install ****** continue while the currently installed version of FCXE is itself at the moment currently open and active.  So somehow we need to get to the bottom of it.

FCXE is a "donor sponsored" application, but I can provide you with an installer file for your engineers to work with.  I can also describe exactly the handful of steps you need to follow in order to replicate this abend.  You can PM me and I will provide my email address so that we can take this offline. 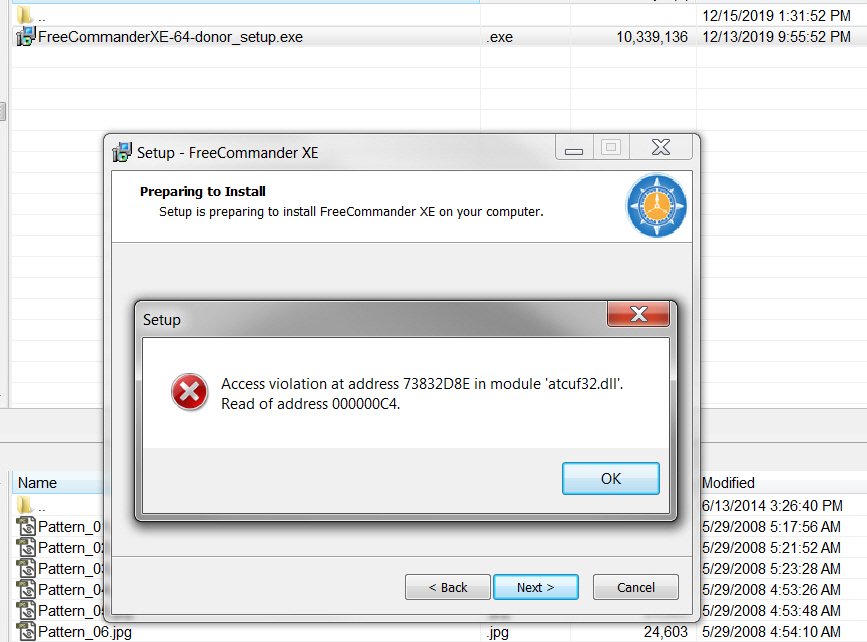